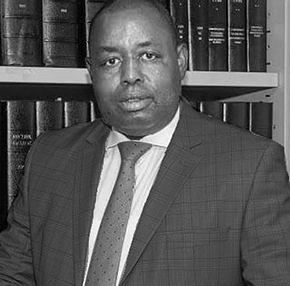 Christian Dudieu is the founder and managing partner of Cabinet DUDIEU AVOCATS since 2006. The firm specializes in OHADA business law and intellectual property law OAPI (African Intellectual Property Organization) and is made up of Property Counsel Approved Manufacturers and OAPI Approved Agents.

In 2010, Christian Dudieu was awarded a call for tenders on behalf of the Ministry of the Environment and the World Bank, with a view to drafting the arguments leading to the drafting of the preliminary draft. of the law on the natural and cultural heritage of Cameroon.

In 2011, he was appointed member of the “Commission for the Application of Intellectual Property Rights” at OAPI.

The same year, he won the international call for tenders (SAGE-FRANCE) with a view to writing the book “The counterfeiting of software in the OAPI space: Comparative study of the legislation of Senegal, Gabon, Ivory Coast and Cameroon”.

Christian Dudieu is the author of numerous works, in particular:

He has also hosted conferences, including:

Christian Dudieu was Co-director of Masters 2 dissertations in Business Litigation and Arbitration at the Catholic University of Yaoundé and was appointed in 2020 Judicial Expert by the Commercial Court of Libreville in Gabon to appraise the money transfer software BGFI-GABON;

Since July 1998, he has been the executive secretary of the NGO “AGIR”, a legal and judicial assistance organization for minors in conflict with the law and minors who are victims of violence.

Since March 2003, he has been a consultant on children’s rights at the Ministry of Social Affairs of Cameroon.

From June 2003 to March 2007, he was consultant to UNICEF – Cameroon for the rights of the child.

Christian Dudieu holds a DESS in intellectual property and a DEA in business law.