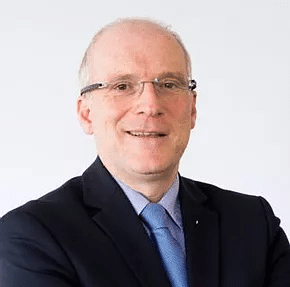 Thierry is the technical consultant in Renewable Energies and environmental issues within SRDB.

Thierry started his career in 1987 with the GROUPE ONET and acted between 1995 and 2003 as their General Manager Europe.

From 2003 to 2004 he was appointed as Group General Manager of PIZZORNO ENVIRONNEMENT specialized in the waste disposal industry.

He thereafter worked for THEOLIA SA as Directeur Général Adjoint and for VOLTALIA SA as Special Advisor to the President.

From 2006 to 2011 he was appointed as president of CONEXIA ENERGY SAS where he developed 140 MW of projects for photovoltaic power plants and obtained planning permission and authorization to connect 50,000m² solar powered systems. He also drew up wind farm development plans for the company.

From 2013 to 2015 he was elected as President of the Economical Commission for the Renewable Energy Union/Wind farms in France.

From 2011 to 2015 he acted as General Manager of the French branch of ENERTRAG AG where he developed their onshore windfarm projects in France.

Since 2016 he is also President of NEXIA Energy and deputy CEO of AALTO-POWER SAS 2 companies specialized in the wind farms industry.