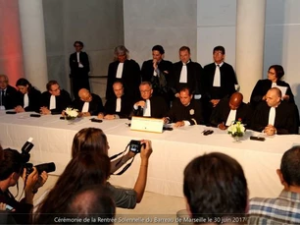 I had the honor of representing the President of Beirut at the Universal Declaration of Human Rights signing ceremony. It took place on June 30, 2017 on the initiative of Maître Geneviève Maillet, President of the Marseille Bar Association.

This event brought together about twenty Bâtonniers. They had come from all over the world, gathered around former minister Corinne Lepage. She is at the origin of this Declaration. Statement which, it should be remembered, had been drafted to be proposed to member States of the United Nations. And this on the sidelines of the COP 21 of December 2015 in Paris.

This text has no real legal significance. Nevertheless, if it is adopted, it will bring an indisputable moral value. The idea behind the Bâtonniers’ signature was that lawyers around the world are the best ambassadors of this Declaration. And, who better than lawyers to defend these rights?